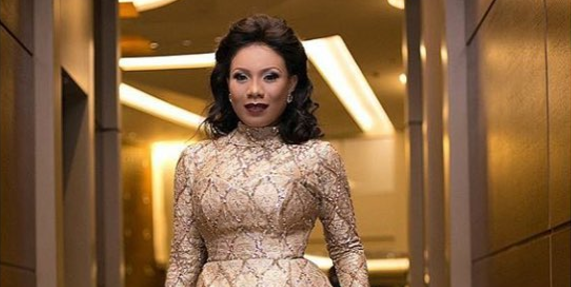 Ghanaian actress, Lydia Zynell Zuh has received a backlash for exposing her cleavage in a photo on social media.

The actress attended the Glam Ball, an initiative of Glam Africa and My Sisters Keeper, a foundation belonging to one of the daughters of President and Mrs Akufo Addo to raise support/awareness for children with Autism.

The Glam Africa ball was attended by several leading personalities in Ghana including President Akufo-Addo, his wife, Rebecca Akufo-Addo Vice-President Mahamadu Bawumia, Samira Bawumia and other ministers of state.

Known for her eye-catching fashion statements on the red carpet, Zynell Zuh has been on the bad side of the Ghanaian public for wearing a curry low-plunging neckline gown to an event that was attended by the President.

The light-skinned actress paired the look with a gold choker as she dined and wined with guests at the event.

Sharing the look on her Instagram, Zynell who was obviously not perturbed by the bashing said the look was created by womenswear designer, Sima Brew and styled by Kelvincent.

Several social media users have criticized the look calling it ‘gross’ and disgraceful.