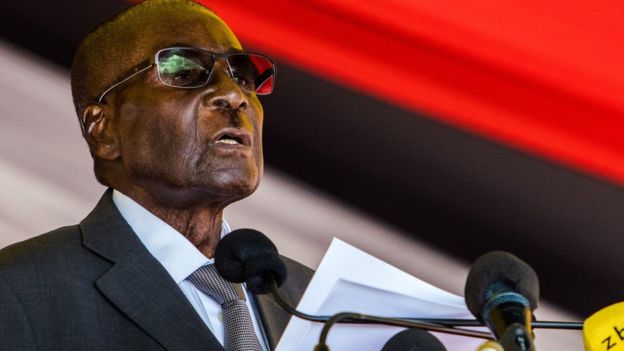 He added that he had donated 300 cattle from his herd, and other Zimbabweans doubled the number as they wanted to contribute towards a “noble cause”.

Mr Mugabe handed the $1m cheque to the AU at its leaders’ summit in Ethiopia.

The donation comes amid a severe cash and food crisis in Zimbabwe.

Last year, more than four million people were in need of food aid in the southern African state after rains failed.

However, there has been a bumper harvest this year, with the country expected to be self-sufficient for the first time in years.

Speaking at the summit, Mr Mugabe said it was a “modest contribution” and a “symbolic step” towards helping to end the “donor dependency syndrome” in Africa.

“As an African and a farmer, the donation of cattle came naturally to me, given that our continent is rich in cattle and cattle are held as a store of wealth,” Mr Mugabe said.

On its website, the AU Foundation says it focuses on development programmes for youth and women, and promoting gender equality.

Mr Mumbengegwi said the donation was significant as it showed that the AU could find innovative ways to raise money for its projects.