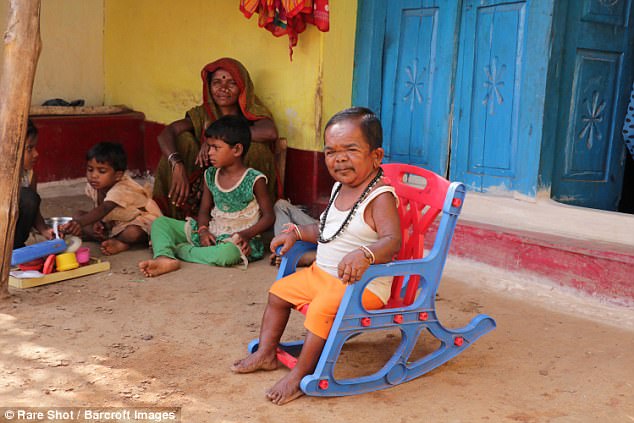 A 50-year-old man whose height is that of a healthy five-year-old is currently the toast of villagers and visitors to their tiny Indian village.

As a toddler, there was nothing to distinguish Basori Lal from his peers, and it was only around age five that his family started to notice that he had stopped growing.

However, because they were poor, his family could not seek medical attention to at least know what was wrong with him, and to also see if the situation could be treated.

As reported by MailOnline, Basori was never given a medical diagnosis, and to this day, his relatives have no idea what caused him to be so short. Basori, being held by older brother Gopi Lal’s wife, Satia Bai.Basori (right) playing with a toddler

His 55-year-old elder brother, Gopi Lal, said: “Nobody was able to take him to a doctor. We are poor people, I am a labourer. Where would I take him?”

As Basori grew older, he encountered some tough times and experienced some bullying in his village, but thankfully, those days are past.

He said: “People used to bully me a lot. They used to call me an alien. But that time is gone now. I am the only one who is being loved by the villagers.”

Now, at the age of 50, Basori lives with his brother Gopi and Gopi’s wife, Satia.

The 50-year-old works in a factory with his relatives, and says he enjoys a glass of whiskey every night before bed.

He has never married and says he doesn’t want to.