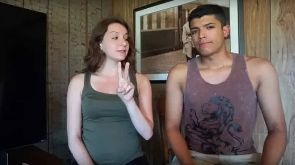 A Minnesota woman has been charged over the fatal shooting of her boyfriend, in what authorities say was a social media stunt gone wrong.

Monalisa Perez, 19, was booked into county jail after shooting at Pedro Ruiz as he held a book to his chest, believing it would stop the bullet.

The couple’s three-year-old child and nearly 30 onlookers watched as she fired the fatal bullet into his chest.

Ruiz’s aunt said they did it to increase their social media following.

Claudia Ruiz told WDAY-TV that her nephew had told her he wanted to do the stunt “because we want more viewers, we want to get famous”.

“He had told me about that idea and I said, ‘Don’t do it. Don’t do it. Why are you going to use a gun? Why?'” Claudia Ruiz told the news channel.

“They were in love, they loved each other,” she said. “It was just a prank gone wrong.”

Ms Perez, who is pregnant, is facing charges of second degree manslaughter. She faces her first court appearance on Wednesday.

County Attorney James Brue described the book as a hardcover encyclopaedia, and said the weapon used was a .50-calibre Desert Eagle handgun.

Police have seized two cameras, which are said to have recorded Monday’s incident.

The single gunshot was fired from about one foot (30cm) away as neighbours gathered to watch outside their Minnesota home.

She told deputies that the stunt had been Ruiz’s idea, and that he had to convince her to do it.

“Everyone was crying. I was standing behind that tree over there. And that was it. I just couldn’t take it anymore so I had to go back home,” neighbour Wayne Cameron told WDAY-TV.

The couple had started a YouTube channel in March, aiming to show the “the real life of a young couple who happen to be teen parents”.

Their most recently uploaded video, on the day that Ruiz died, was titled: “Doing scary stunts at the fair”.

Last week Ms Perez told her viewers that it was a “blessing” to have her husband home for the forthcoming birth of their son, who is due in September.