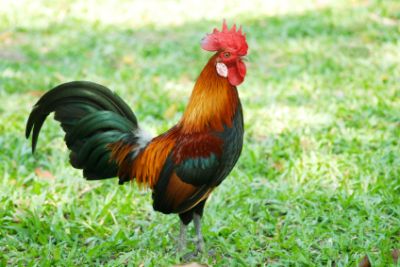 A Photo of some school children has gone viral on social media after school authorities awarded a fully grown fowl each to the children at a Speech and Prize day for emerging winners at second term exams.

The school is believed to be Wiamoase government school, a community in the Ashanti Region.

The school children numbering about six, were seen in a group photo as they happily posed for the cameras with smiles with each of them holding their fowl. In what is supposed to be a ‘historic’ photo shoot for the children on their prize day has rather turned their school into a laughing stock.

While others are criticizing the school authorities in what they describe as the most ridiculous school prize ever, others defend the move as the smartest on the side of the authorities to encourage the kids to learn in their own small world.

Some commentators argue that, lack of educational materials in rural Ghana might have forced authorities to award these ‘laughable’ prizes.

On his side, the board chair of National Communications Authority Kwaku Sakyi Addo, disagrees with the many social commentators who care calling for the heads of the school authorities.

The renowned broadcaster insists, authorities of the school must be applauded for coming up with the idea to promote learning in such a village school.