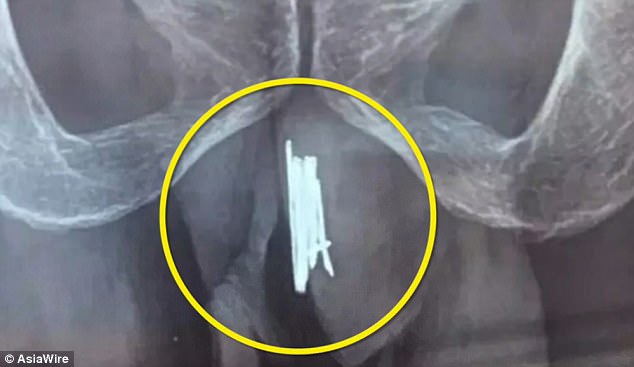 A 35-year-old man was rushed to hospital after putting 15 sewing needles into his penis in search of ‘excitement’, Chinese doctors have said.

The man had the needles in his penis for around one year and sought out medical advice after suddenly feeling intense pain and seeing blood while urinating.

Doctors spent an hour and a half removing all craft tools from the narrowest part of the penis on June 20.

HuaShuang Morning Post reported that the 35-year-old bachelor was admitted to The General Hospital in Shenyang in the Liaoning Province on June 20.

See Also: A Man Broke A Guinness World Record By Having Sex With 57 Women Within 24 Hours

The man said he had been sticking needles in his genitals for about a year.

Dr Cao Zhiqiang, a urologist said an x-ray showed the needles stuck at the membranous urethra, which is also the narrowest part of the male urethra.

The patient claimed he did not feel any pain as he put the needles in with the pinhead up.

However, with 15 needles inside the penis, it began causing him pain and bleeding while urinating.

By using a guidewire, the needles were taken out bit by bit.

Dr Cao said the hospitals’ Andrology department had had patients who put pen refills and thermometers in the penis.

‘There are scholars explaining this scenario as one of the peculiar sex similar to Sadomasochism and foot fetishes. Patients are looking for excitement through unusual ways,’ Dr Cao explained.

He also added that people who fascinate about peculiar sex should be cautious on safety as it could cause stricture on the urinary tract.