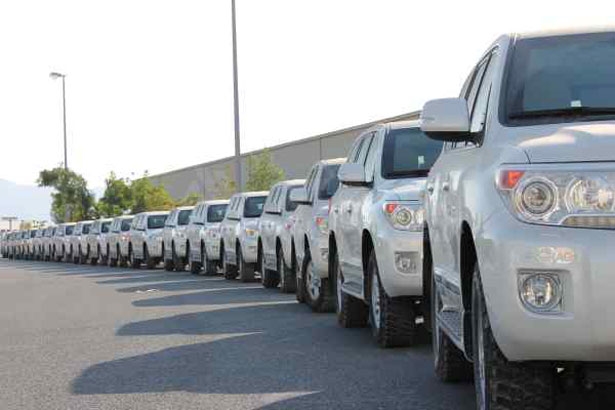 The taskforce empowered to search and retrieve missing government vehicles called Asset Retrieval Taskforce has found over 60 vehicles suspected to be some of the missing State vehicles at Nsawam in the Eastern region.

The taskforce in an operation Wednesday found the vehicles parked at a yard belonging to one William Baah, who identified himself as an auctioneer. Five of the cars have been identified as State vehicles.

Some of the vehicles that have the customized SPD number plates and include Land Cruisers, Mitsubishi Pajeros, and BMWs.

See Also: Missing State Vehicle Has Been Retrieved From A Spraying Shop

“They are over 60 cars; some are government cars,” the leader of the taskforce told the media. “We can’t judge it here. That will be left to our big men. We only came to pick the information and will send the signal to Ghana government.”

“When you owe a bank or an individual and the person takes you to court; the court goes to your house for execution and when they find a property or car on your premises they seize it and ask you to go and pay your debt after that you come for your vehicle,” Baah explained to the media.

In March, the Government announced that about 234 vehicles are still missing following the change of administration.