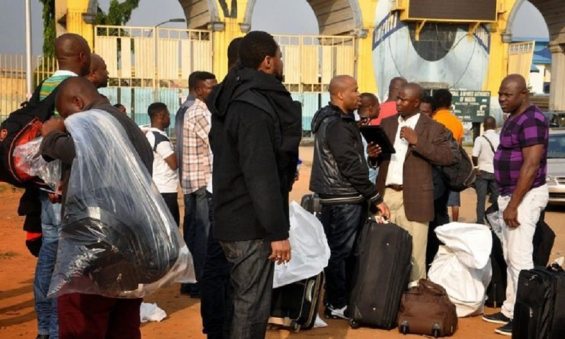 About 63 Ghanaians arrived at the Kotoka International Airport in Accra from the United States of America as the second batch of deportees following Donald Trump’s crackdown on illegal migrants.

Most of the deportees were handcuffed as they disembarked from the chartered flight, Onua FM reports.

All of them are males. Officers of the National Disaster Management Organisation (Nadmo), the Ghana Immigration Service and the Ghana Police Service were on stand-by to assist the deportees go through screening.

The United States Embassy in Accra has explained the 63 Ghanaians deported from the US to Ghana Wednesday morning was based on the orders of an immigration judge. “U.S. Immigration and Customs Enforcement (ICE) removed 63 Ghanaian nationals to Ghana and 12 Liberian nationals to Liberia in accordance with their final orders of removal,” the Embassy said in a statement.

After the deported were screened and cleared, each was given a GH¢100 to return to their various destinations.

Three of them who were the first to be cleared told our correspondent that they had no phones to even reach their family and relatives. Most of the deportees have no belongings. Some are from Ashanti and Brong Ahafo regions.

The deportation comes on the back of US President Trump’s resolve to rid his country of illegal migrants including Ghanaians.

About 7, 000 Ghanaians in the US are said to be affected by the decree.

Last month, the US Ambassador to Ghana, Robert P. Jackson, disclosed that 100 have already arrived in Ghana with more to follow.