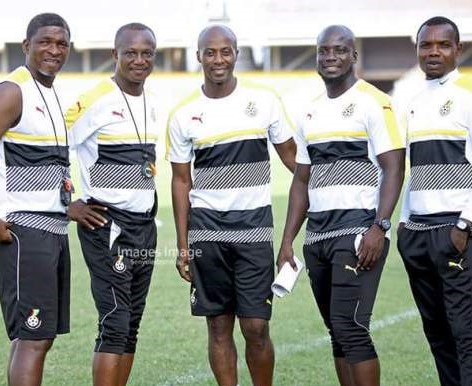 There have been a few familiar faces around the Black Stars as they prepare for the 2017 Nations Cup qualifier against Ethiopia on Sunday.

A huge throwback feeling about the Black Stars technical team dominated by ex-internationals has given the Stars a unique Ghanaian flavour and those involved are determined to make it count on the field.

Kwesi Appiah, the boss and left back from the 80s and 90s, supervises a team that includes former teammates Richard Kingson, Stephen Appiah and Ibrahim Tanko.

It has proved a hugely popular move; ex-Black Stars who know and understand the team dynamics in charge of the team.

Take goalkeeper Richard Kingson as an example. He earned 90 caps for Ghana, played in two world cups and three Afcons. These days he is responsible for training the goalkeepers and is thrilled with the new role.

“It gives me a lot of joy, it is something that is in me and I always like to do to train the young ones to impact what I have experienced as a goalkeeper ”.

The former Dortmund striker played only 9 times for Ghana including at the 1996 Nations Cup. But he has climbed the coaching ladder pretty fast, working as assistant coach in Germany, Japan and with the Cameroon national team.

Now he hopes all that experience will prove vital as he assists Kwesi Appiah through his latest tenure.

“In my experience, I learned a lot when I was away and fortunately now enough I know the new coach very well so I will team up with him and bring the national football back to its feet again.”

There is feeling that if the experience in the backroom staff can lift up the Black Stars to greater heights again, Kwesi Appiah will be hoping that is the case.