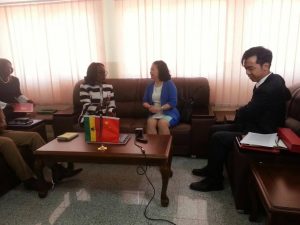 Madam Sun Baohong, the Chinese Ambassador, on Tuesday donated items, including desktop computers, printers, UPS and a cheque for 10,000 Ghana cedis, to the office of the Attorney General.

The donation is to support the Attorney General’s Office, towards organising a stakeholders’ consultative workshop, on the Office of the Special Prosecutor Bill, 2017.

“We support the new government of Ghana to carry out anti-corruption campaigns, and expect to strengthen our cooperation and exchanges on both domestic and international combat against corruption,” she said.

The Attorney General and Minister of Justice, Madam Gloria Akuffo, received the donation and said a Bill on the establishment of the Office of the Special Prosecutor had already been put together.

The donation comes at a time when several Chinese nationals involved in illegal mining popularly known as galamsey have been arrested and facing prosecution.

Are they trying to bribe us out of all their galamsey yawa?