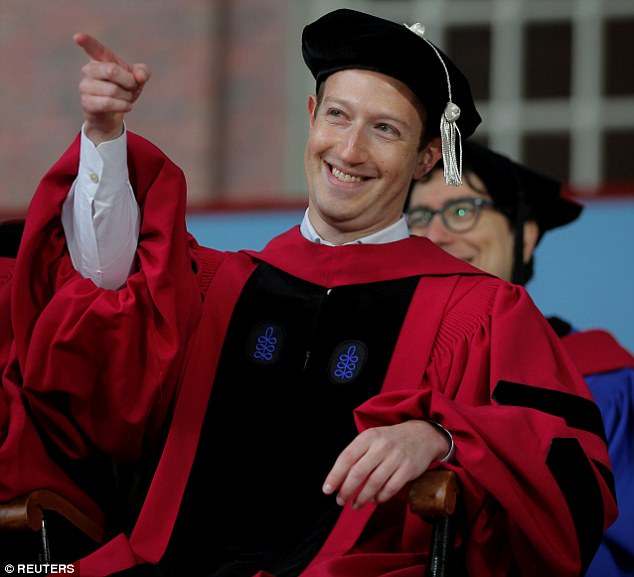 Mark Zuckerberg teared up during his commencement speech to Harvard graduates, telling them it is up to their generation to care about others and to fight inequality.

The billionaire CEO returned to Harvard on Thursday to receive an honorary degree, 13 years after he famously dropped out of the Ivy League school to focus on Facebook.

‘Change starts local. Even global changes start small – with people like us,’ the 33-year-old told the crowd of graduates.

‘Every generation expands the circle of people we consider ‘one of us.’ And in our generation, that now includes the whole world. …But we live in an unstable time.

‘There are people left behind by globalization across the whole world. And it’s tough to care about people in other places when we don’t first feel good about our lives here at home. There’s pressure to turn inwards.’

Zuckerberg, now the youngest commencement speaker in Harvard’s history, started off reliving some of his college memories.

He told the graduates that he was scheduled to speak to the school board after building the website Facemash, an early precursor of Facebook that allowed students to compare the attractiveness of their fellow classmates.

His parents showed up to the school to help him pack up his belongings, and his friends threw him a goodbye party, where he met his future wife Priscilla Chan in line for the bathroom.

Zuckerberg recounted: ‘In what must be one of the all-time romantic lines, I said: “I’m going to get kicked out in three days, so we need to go on a date quickly.”

He joked: ‘Actually, any of you graduating can use that line.’

‘I didn’t end up getting kicked out — I did that to myself. Priscilla and I started dating.