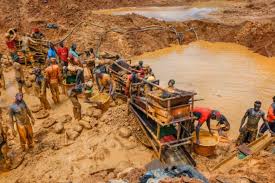 Before all the 10 accused persons were granted bail by the Sekondi High Court 1 on May 3, they had all been represented in court, during their 6th appearance, by lawyers; Stephen Alewabah and Erickson Abekah.

However, when the case was called again on May 15, the five Chinese had brought lawyer Constantine Kudzedzi to represent them.

Lawyer Stephen Alewabah was absent in court and one of the five Ghanaians also had lawyer Erickson Abekah representing him.

Four of the accused had no representation in court, forcing the presiding Judge Justice Amoako Asante to adjourn sitting until May 24.

“I was hired to speak on behalf of the five Chinese. That is what I was brought here to do. I was not asked to speak for the other accused persons,” Lawyer Kudzedzi told newsmen.

Lawyer Erickson Abekah also told a journalist that “the third accused [Ghanaian] asked me to stand in for him. I do not know about the four other accused persons. But whatever the case may be, we will have to assist them because they are fellow Ghanaians.”

The four, who were “surprised” by the turn of events, were given a week by the court to look for their representation before the case is called on May 24, 2017.

Eight charges have been levelled against them by the state, represented in this case by Senior State Attorney George Sackey.

Presiding Judge Justice Edward Asante has already shown his commitment to seeing the end of the matter when he told the four accused persons to look for their lawyer immediately in order to fast-track hearing of the case.