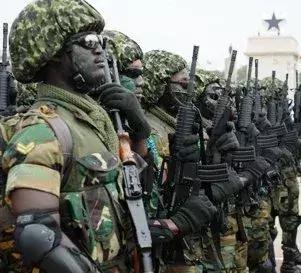 The Ghana Armed Forces (GAF) has condemned the actions of the military officer who was filmed as he whipped a commercial bus driver and his conductor (mate) for parking wrongly.

According to the military, the solider in the viral video has been identified and is currently facing disciplinary action.

Speaking to Kuulpeeps.com, the Director of Public Relations of GAF Colonel Eric Aggrey-Quarshie, said the officer would likely be penalized with either a reduced rank or may be put in a military cell for a while.

“The actual punishment will be determined after the full circumstances surrounding the case have been identified and interrogated,” he said.

According to Col Aggrey-Quarshie, the military officer got angry after the commercial vehicle crossed him near the 37 Military Hospital, which forced him to crash into two other vehicles. He said, “the military officer then acted on his emotions and used a cane on the driver and his mate.”

“The best thing the military officer should have done was to report the incidence to the police. He should not have beat them,” the GAF Director of Public Relations said.