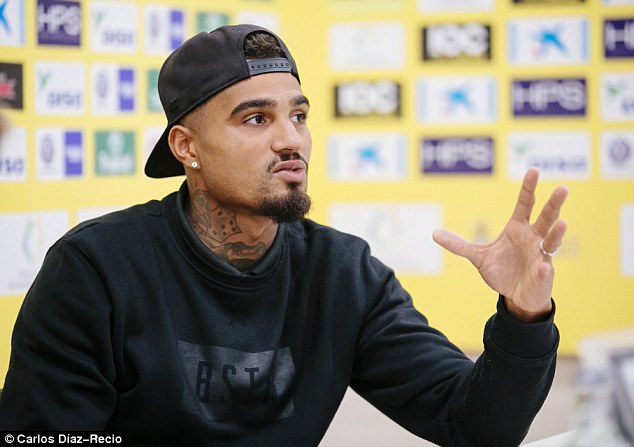 Boateng’s move to Spurs was 10 years ago this past summer. It ended after two seasons and barely 24 appearances. But it didn’t finish him. He was inspired by a young Jurgen Klopp while on loan at Dortmund and he ended up winning Serie A alongside Zlatan Ibrahimovic. He’ll be 30 next month and he’s the only player still playing who has scored in all four top European leagues. ‘It’s true,’ he says when asked to verify the tale of him buying three cars in a day while a young player at Tottenham. ‘I still have a picture at home of me standing in-front of three cars and a big house and I’m standing there like I’m 50 Cent. I look at it sometimes and I say: “look how stupid you were”.

Kevin grew up with his mother and older brother George in a run-down part of Berlin, Koloniestraße, was a no-go zone for the police except when they were investigating a shooting. Now he found himself  living alone in Loughton, near Spurs’ training ground. And training was soon all he was doing, after Martin Jol froze him out. ‘Jol told me after a month that he didn’t want me. So it felt like me against the world; you know that feeling when you shut-off?’ he says. ‘I had a lot of money for a 20-year-old. I thought: Okay so you don’t want me, I will enjoy my life. I went out night-clubbing. And then of course you can’t perform.

‘You end up trying to buy happiness. I bought a Lamborghini. Wow! I was happy for a week. After that I didn’t even use the car. Who drives around Loughton in a Lamborghini?’ ‘I got friends to come visit me but they weren’t real friends,’ says Boateng. ‘They weren’t the type of friends who will tell you: “What the f*** are you doing? Go and train and play football.” They were friends who would say: “Let’s go out”. ‘At first you don’t think that anything is going wrong. You’re dropped to the second team but you see your money coming in and you say: “okay, I get my fun somewhere else”. Girls, nightclubs, friends, fake friends.

‘But in the end I woke up one morning and looked in the mirror and thought: no that’s not what I want to be. I looked old because every night I was out until six in the morning. I was 95 kilos. I was swollen because of the drinking and the bad food. I said to myself: “I don’t want to be this guy”.’

‘Two really good friends in London who I still talk to came over and we cleaned my whole house together. They said: “If you want to go out, we will go out, but we will be behind you if you want to play football”. The chance to play came when he went on-loan to Dortmund managed by a still relatively unknown Klopp. Klopp wanted Dortmund to keep Boateng after his loan spell but a price couldn’t be agreed and so he went to Portsmouth instead.

Due to the persistent financial situations at Portsmouth, Kevin signed for Genoa and Milan the same day.

‘Two weeks after my agent told me I was joining Genoa he called and said: “What do you think about Milan?” And I said to him: “Yeah it’s a great club. Why?” He said: “Would you like to play for Milan?” I went to Milan. Genoa were still in the deal but I knew I was never going to play for them.’

‘I remember my first day in the dressing room I just saw the names and I said: this is a dream. I called my older brother and said: You know I’m sitting next to [Andrea] Pirlo. He said: “Take a picture! Take a picture!” And I had Beckham’ s locker because he had just left.

Of all the stars in the Milan galaxy, Ronaldinho included, Ibrahimovic was the one who made the biggest impact. ‘You think he’s going to be this arrogant big f***** and not a nice guy at all, but he’s the absolute opposite. On the pitch, he’s very serious, very professional. But off it he’s just the funniest guy.’

The team won Serie A. ‘How could they not with those players?’ Boateng says, adding: ‘They had a superstar in every position and the crazy thing was that I was playing! I knew that everybody there had talent and technique – maybe the only one with less technique was [Gennaro] Gattuso. But he had another talent: he ran 120 minutes like a psycho – so I had to bring something different. I brought a fighting spirit. I was running, I was getting fouls, I was kicking people, to the point where they started saying: “He’s the new Gattuso”.’ Boateng famously stole the show at the title-celebration, moonwalking dressed as Michael Jackson. It was homage to one of his biggest heroes, just 12 months after he had met another – Nelson Mandela. It was the South Africa World Cup and “David Black-ham” was what they were calling me. ‘Everybody was going crazy for me so we go into the room and everyone says: “Hello, hello, hello” and he shook my hand and he pulled me towards him and he said: “My daughter wants to marry you.” I said: “Sorry I already have a girlfriend,” and he said “no, no but I have others!”

Boateng would go on to do his bit to fight prejudice in January 2013 when he walked off the pitch in a friendly against Italian fourth division side Pro Patria after he had been racially abused by a section of the crowd. His team-mates walked with him and Rio Ferdinand was among those who applauded the move.

That’s how Boateng ended up delivering a speech to the UN and heading up the first ever FIFA anti-racism taskforce. 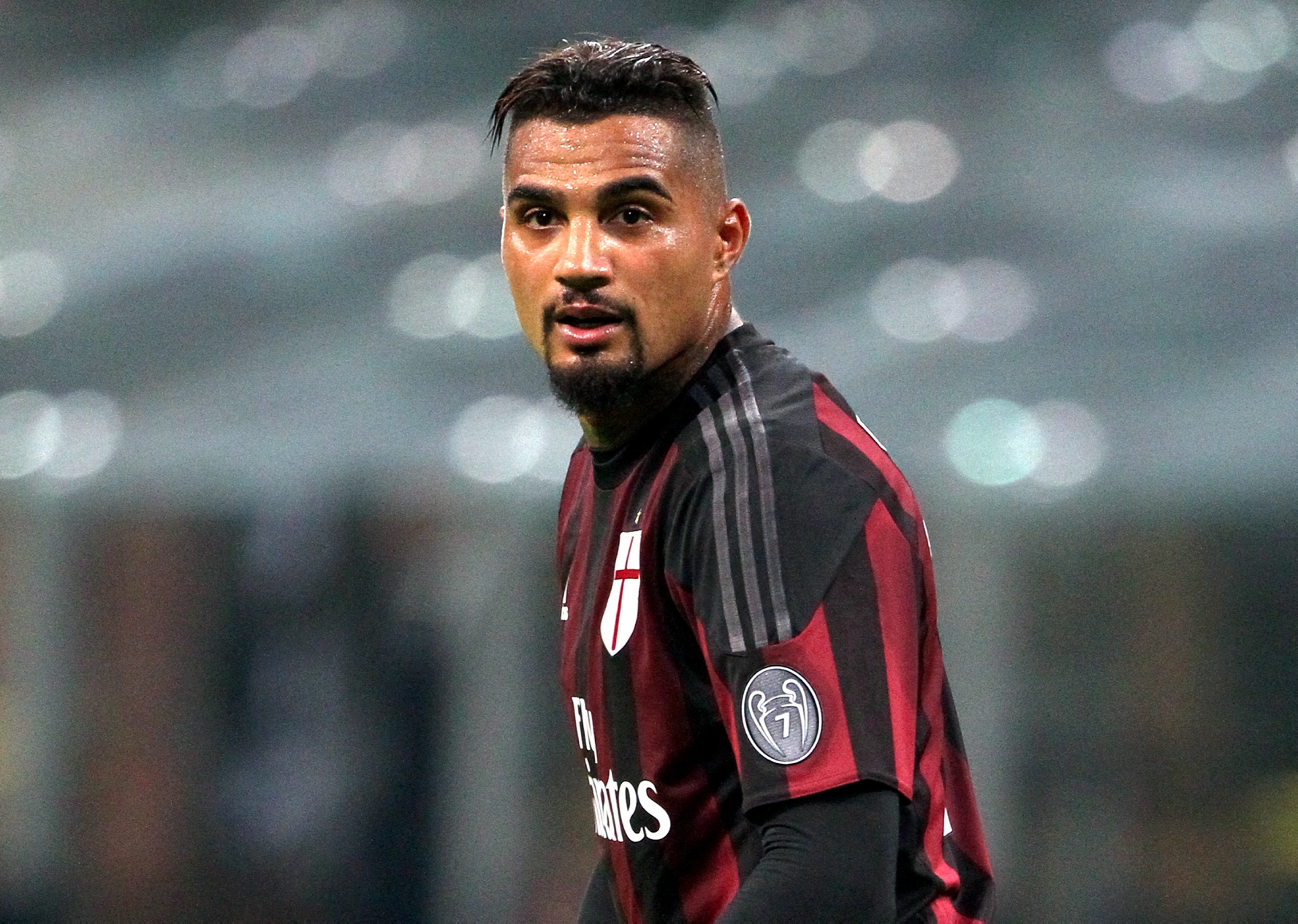 ‘I was not even informed when the task force was abandoned last September, and we have seen what happened to [Mario] Balotelli playing in Bastia since. He is a close friend of mine and we spoke about it. He said to me: “What can I do? I can put something on Instagram, I can put something on Twitter.” But there is nothing else he can do. He can’t fight racism alone. And I know that walking off every time is not the answer.’

‘There are always two sides to the story when something goes wrong. I know I did bad stuff. I went out. I went clubbing. But I was 20! I left my home, my family, all my friends. I was alone there. No one cares. No one came to ask me “How are you?”. If you don’t perform on the pitch they will judge you. I understand because I was a fan at Hertha Berlin and I judged the players there. You are a number in the system. You cost money, so if you don’t work… they change the number.’

Boateng plans to eventually work as an agent or advisor, ‘help these young guys to be the best they can be,’ he says.

Karel Adotey Mensah - July 5, 2020 0
A lot of Windows 10/Windows 8 users don't take advantage of the Microsoft Store. And that's a shame because there are some...