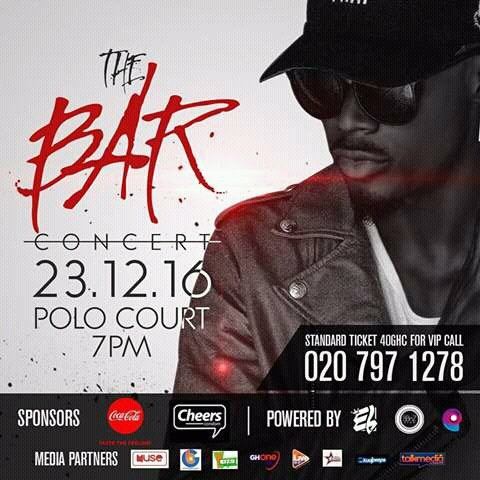 Finally! The BAR 3 concert is here. For those of you who don’t know, the BAR is an acronym for “BEST AFRICAN RAPPER” and is a series of mixtapes by Ghanaian rapper EL. For the past 3 years, the rapper  has always released a BAR mixtape, and then followed up with the concert. After several speculations by the public that the concert wasn’t going to happen this year because the rapper hadn’t publicized it, the concert has been scheduled to happen on the 23rd of December 2016 at the polo grounds.

The concert which characteristically features guest acts, mainly those who were featured on the mixtape, the acts are going to take turns to thrill the fans on stage. If the other concerts are anything to go by, then EL, will take turns to appear on stage with each artiste to perform a song they have together, then leave the stage afterwards to let the artiste perform their personal songs.

It’s going to be a lot more interesting this year because EL featured a lot of upcoming artistes who have a moderate buzz this year, and they all showed up as well.

Tickets can be purchased at the Fotostore, Chix n Ribs and Airport Shell. Don’t miss out on this history making.

Baby Photoshoots That Will Make Your Ovaries Scream For Joy

12 Things We All Took For Granted Before The Coronavirus Outbreak