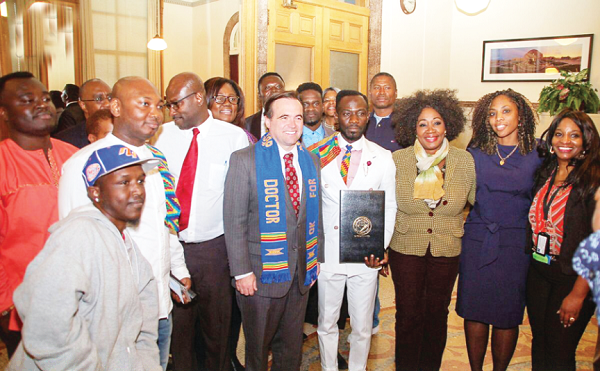 Our very own rap doctor has been given the key to Cincinnati. In case you’re still lost, Cincinnati is a city in the United States of America and…

… The “Key to the City” is an honor bestowed by a city upon esteemed residents and visitors.

Earlier this year, Ghanaian investigative journalist Anas Aremeyaw Anas and award-winning actor, Abraham Attah were given the keys to Massachusetts in recognition of their respective accomplishments.

Also, Mayor of Cincinati, John Cranley has declared the November 17 of each year as ‘Okyeame Kwame Day’; to solemnise the status of the Hiplife Artiste as an International Cultural Ambassador to the City.

A presentation ceremony which took place at the Renew Community Church was held to applaud the artiste for his unprecedented efforts at fighting Hepatitis B, an initiative which has been recognized by the Black Nurses Association.