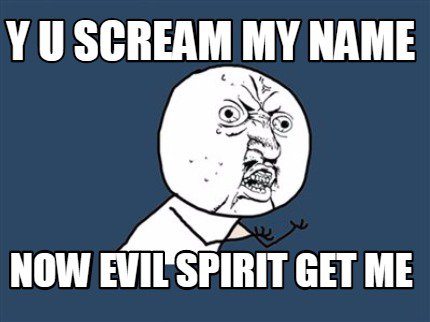 We all remember, at one point or another, being told certain things we did were considered taboo. Of course, as modern men and women, we all know them to be complete bull. But here are seven things our parents told us were taboos. For those of us who can’t whistle, this isn’t a problem. But for those who can, you constantly have to dodge smacks from your parents and grandparents for doing this at night. The belief behind it is, when you whistle, you calling evil spirits and letting them know where you are, so they can attack. But actually, our ancestors just didn’t want to be bothered while they slept. For some tribes in Ghana, they believed that you should never write someone’s name in red ink. Unless, of course, you wanted them dead. Within 24 hours. Apparently, the red symbolized the person’s blood being spilled.

Washing Your Face With Water From The Fufu Mortar When you’re done pounding fufu and you are washing the mortar, it is a taboo to wash your face with water in the mortar, no matter how hot and sweaty you are. The water supposedly drives you mad and makes you see the faces of your ancestors. I’m not sure the logical reasoning behind this one though. In previous times, at night, it was a taboo to loudly call out somebody’s name at night. This was because it allowed evil spirits access to the person. This taboo came about because people did not want to be disturbed as they slept. This is a taboo because, while you are pounding the empty mortar, you are supposedly pounding your mother’s boobs. That has honestly got to hurt. Unfortunately, I don’t know the reasoning behind this taboo as well.

Farming And Fishing On Certain Days For this taboo, it was believed that, if you went to your farm or went fishing on certain days, like, maybe Tuesday, you would meet either a god or an evil spirit. Now, don’t be misled by the fact that you would meet a god. If they ever came face-to-face with you, they would most likely curse your family for a hundred generations. The logical reason was to conserve local wildlife and this worked well because we are still surrounded by bush to this day.

Most people nowadays, believe old traditional things like taboos and rites are uncivilized and archaic. But personally, I think we can move forward as a people, but still embrace the stories and things of old.