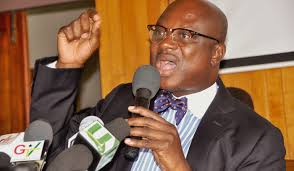 Kumasi Mayor, Mr. Kojo Bonsu has resigned after all the controversy that existed between him and the Kumasi Traditional Council. In his resignation letter, Mr Kojo Bonsu noted that, “He has conveyed his resignation as the Metropolitan Chief Executive of the Kumasi Metropolitan Assembly to the President of the Republic of Ghana”. Mr Bonsu also expressed his gratitude to the President and the Asantehene, Otumfuo Osei Tutu ll. His resignation came a week after the traditional council performed rituals at the Manhyia palace to break all ties with Mr Bonsu and also gave a week’s ultimatum for the dismissal of the mayor because he removed Amoamanhene, Nana Agyenim Boateng from the Kejetia project board without informing Otumfuo Osei Tutu II.

A copy of his resignation letter 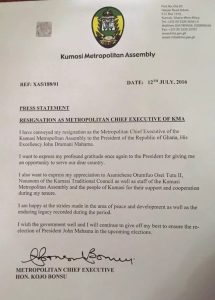