Almost everyone has their favorite TV shows they’d be rushing home to get comfortable with and nine times out of ten these are foreign shows. The closest you’d have any keenly watched series being African is if it’s African-American or has a couple of African-Americans featuring in it. And that’s totally unfair. There’s no disputing that Americans produce most of the great series in the world but to write off all African series (and we all do it) because of a couple of bad ones you’ve stumbled across is uncool. To cut a long ramble short, I’d love to show you how prejudiced you’ve been and how very unaware it has left you.

Most plus size ladies can identify with this one. It’s a Nigerian comedy of a plus-sized radio personality, played by Abimbola Craig who tries to combine the pressures of being physically large with her job. She faces constant criticisms from her mother due to the absence of a man in her life and reminders from her size 10 sister of her weight. The series is a pretty good watch of her hilarious journey to weight loss, being successful and finding a man who’d love her for her. You can watch this on Ndani TV on YouTube.

A drama about Lagos youths and how they deal with sex, love and relationships. It features stars like Tiwa Savage and Chris Attoh and its made up of a whole lot of intrigue and suspense. You can get all episodes of this series on MTVShuga.com.

An African City is about five successful ladies who have returned to Ghana to look for love after years of staying abroad. From past hurts to one night stands and weird lovers, these ladies face the struggles of finding the perfect men to start life with. It’s a combination of hilarious scenes and quite emotional moments you’d love to see. While its first season can be watched on anafricancity.tv, Season 2 of An African City can be watched on anafricancity.vhx.tv . 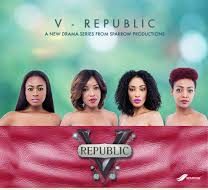 Another series by Shirley Frimpong-Manso which shows how four women are thrown together by their individual problems they seek answers to. It’s an all star thriller which features people like Joshline Dumas, Christabel Ekeh, Jasmine Baroudi, James Gardiner and Nikki Samonas. The complete Season 1 can be obtained at www.sparrowstation.com/vrepublic.php .

Shampaign is the latest Sparrow production and it’s a nice digression from the usual love plots we see as it  focuses mainly on politics. The story line is encapsulated by a political team which gets a single mother elected as the first female President of the country while we are given a detailed insight into the problematic lives each of them have. It depicts also the sticky web politics is but gives unexpected romantic twists. Shampaign is quite new and shows on DSTV. It will be on Sparrow Station in July.

Just as I said, these are great series you should see and i know you will definitely be on a search for more after. *Fingers crossed*.