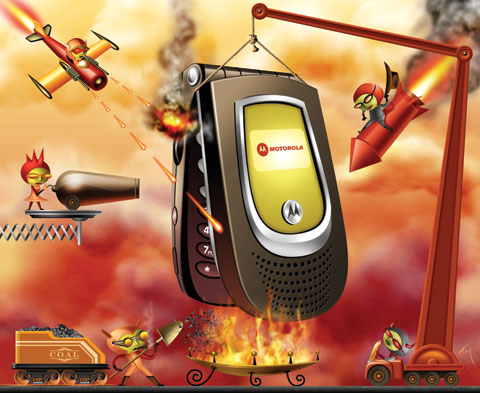 A couple years back Circle was the number one destination for brand name phones that were priced way below reasonable. Things are different now; you could still try to buy a brand name phone for cheap at circle but you would probably end up going home with a phone box full of regret. Here’s a couple of reasons for that.

I can’t imagine that there’s a phone thief that doesn’t have beef with apple. Put aside the virtually unhackable touch id which allows for only 5 tries, apple security is still top notch. Bricking is very real. For the not so tech savvy  this is when your phone becomes as useful as a brick; when there is no actual access to the phone. Apple id is impossible to remove without the password or proof of ownership so why risk the wrath of some mallam for a brick?

After the release of Apple’s touch id in 2013 a lot of companies like Samsung, HTC and Huawei followed suit but others  went in a much different but no less inferior direction, eye authentication. Fujitsu pioneered iris recognition sensor technology with it’s flagship ARROWS NX F-04G. China based Vivo also featured iris sensor technology in it’s phone Vivo X5pro which comes equipped with a 32MP beast of a front camera.

This approach to phone security has some flaws in that current technology can be bypassed with some effort but it is still very convenient to use. Unlike the other security measures this one can be used even if it doesn’t come factory installed. A disadvantage though is that there are workarounds that allow access to the phone.

Not as flashy or as unbreakable as any of the others but Blackberry’s picture password also manages to keep your phone secure. Blackberry takes a data over hardware approach to phone security which works for them, apparently, seeing as the president of the United States of America uses one. The nearly impossible to crack device erases all the user’s data after ten failed attempts to open it.

With all the innovation in the world of tech security, phone related crimes are becoming increasingly unattractive.