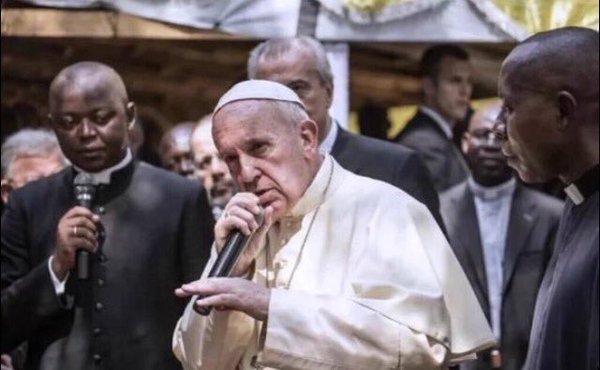 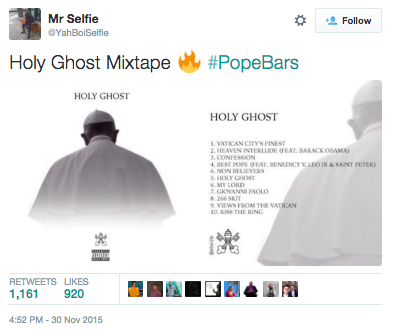 On Monday, November 30th 2015, Pope Francis toured Bangui, which is the capital of the Central African Republic, where he urged the people to reconcile a long-held civil war. During his visit, he was photographed by Gianluigi Guercia in a photograph that was then distributed by Getty Images to newspapers and publications worldwide. In the photograph, he is holding a modern wireless microphone in a manner that emulates rappers.

It wasn’t long before #PopeBars was created and it started trending worldwide. People made the greatest rhymes and attributed it to the pope.

Y'all WANT to flex
On PONTifex?!#PopeBars

They call me the pope but I'm the rap evangelist
I spit fire on ma enemies
No, the devil can't handle it #PopeBars pic.twitter.com/0912r3SojP

Hand on the mic, hand on the bible, these nuns chasing after me, but Jesus is my idol! #PopeBars pic.twitter.com/7eATkiiSMt

Coldest rapper to ever call Rome my home/ Rhymes so real Moses could set em in stone #PopeBars @netw3rk pic.twitter.com/2zjhE71XIc

Straight from Argentina then to Rome
My Hail Marys so sublime
They retired the old Pope before his time 😇#PopeBars pic.twitter.com/lUwBeaDYZf