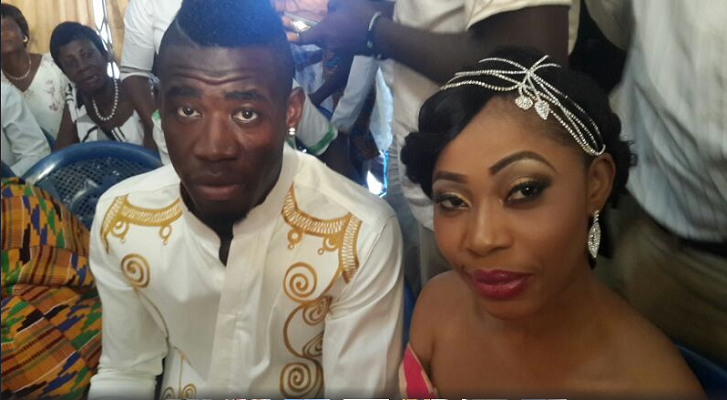 Afriyie Acquah has divorced Amanda Acquah in a rather distasteful manner. Reports indicate that they are not even on talking terms now. In August 2015, Afriyie Acquah deleted photos of Amanda from his Instagram page but later on, it was rumoured that he deleted them because of distasteful comments that people were spurring under Amanda’s photos. With the current situation, looks like that was just half of the story. I’ve decided to go into a few theories about why Afriyie ended things with his wife.

Amanda compared the manhood of Afriyie Acquah to Jordan Ayew in a leaked tape. According to her, Jordan was more endowed than Afriyie Acquah. There have been reports that this created tension between Jordan and Afriyie whenever Black Stars was in camp. There is so much of that a guy can take before he snaps.

Of all things, telling someone else that Afriyie Acquah was impotent was probably the lead reason for this divorce. In a tape released by a certain Rodney Aboagye, Amanda was heard calling Afriyie Acquah an impotent man who could not impregnate her.

Jumping from Kenpong through Jordan Ayew to Afriyie Acquah shows that Amanda has a certain level of taste when it comes to men. Many argued that she was with Afriyie because of his money, particularly after Amanda was heard taking pride in how rich Afriyie was in the leaked tape. It is possible that Afriyie has finally realised that Amanda is with him for his riches and not love.

Amanda’s nude photos found their way into the media. According to her, they were old photos. For a married woman to have her nude pictures in the media is reason enough for a Ghanaian man to feel the need to end his marriage.

One last thing is the rumour that Amanda bewitched Afriyie. Afriyie Acquah is yet to speak to the matter but rumour has it that concoctions, charms and amulets were found in their home. Those were said to be for Amanda.

Kuulpeeps is of the view that these reasons added up to the decision that the Torino star has taken.