Kuulpeeps has chanced on a photo of questions in a Basic Education Certificate Examinations (BECE) English Language mock exercise of the Pusiga District of the Upper East Region which stated that Nana Addo was also known as ‘all-die-be-die’. This photo has gone viral on social media.

The Ghana Education Service has said that it finds it inappropriate that such questions were set for students. It has vowed to launch an investigation into the matter. 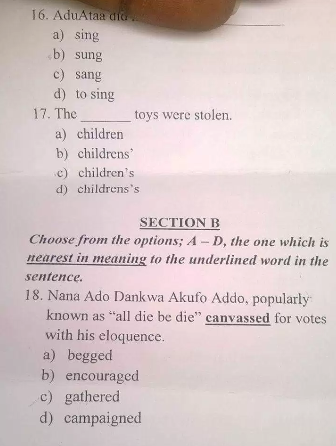 The term gained popularity when Nana Addo made the ‘all-die-be-die’ remarks in the heat of the 2012 election campaign at a rally in Koforidua in 2011. Many argued that he was instigating violence at the time but he later on came to clear the air that he just meant to charge on his party members to stay courageous and vote the NDC out.

Akufo-Addo Will Debate the President ‘anytime, anywhere and anyday’ If It Will Solve Ghana’s Problems