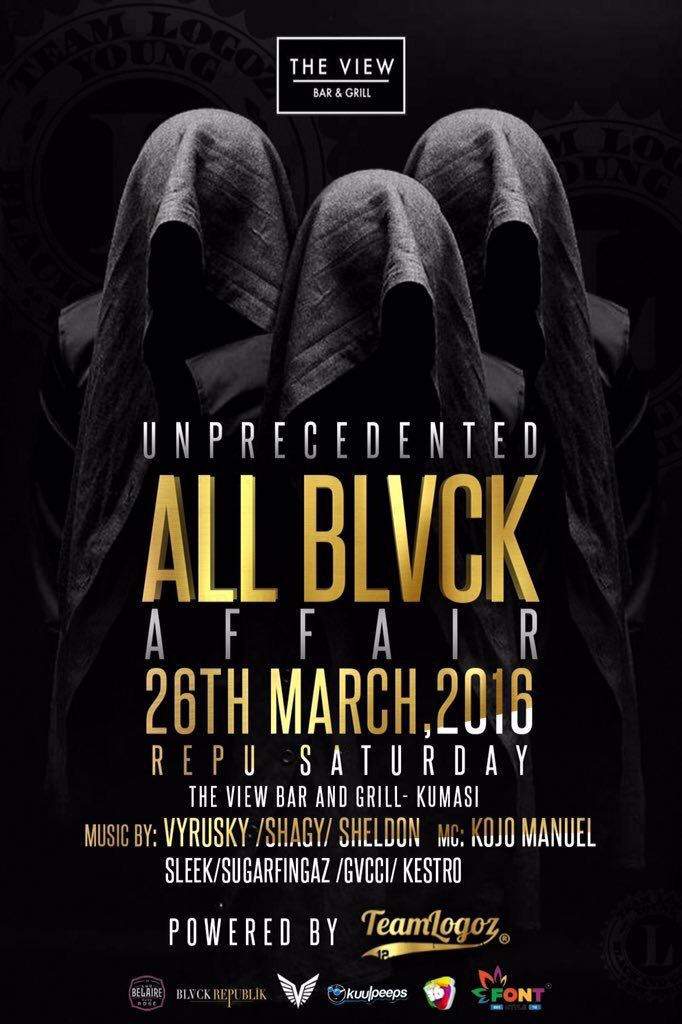 The story of the Unprecedented All Black Affair (UABA) Party is one of progressive success and a single overwhelming event that almost undid TeamLogoz; the guys behind the party which will have it’s 3rd edition at The View Bar & Grill on Repu Saturday; 26th March.

It begins in early 2013, when a group of boys decide to have a drink-up in Brunei, one of the very popular hostels in KNUST know for it’s massive population of Nigerian students amongst other things. Stories of that drink up; whose name was supposed to be The Lick but somehow went by ‘Chakachaaka’; are still told by alumni of KNUST. As one of the organisers puts it, the room where the drink-up was held has never been the same since. Those were the early days of TeamLogoz; a group of guys who noticed a trend on campus where a team always rose to the occasion to provide entertainment for the partying crowd in the university. After the success of Chakachaaka; the decision was made to have a full blown party to position TeamLogoz as the ones to take the mantle of entertainment providers. The Unprecedented All White Affair was organised at the Golden Tulip Hotel. In spite of its distance from campus, it had a turn out worth following up on.

The following semester, another decision was made to have a party, this time closer to campus and with a different colour theme. The first ever Unprecedented All Black Affair was organised during Repu Hall Week of 2014. With the competition that came from about four other parties happening on the same night, UABA had a great turn out and a fantastic event with DJ Vyrusky on the turn tables. The success was getting bigger each time and it didn’t seem like it was stopping anytime soon so another party was planned for the first semester of the final year for the Logoz Boys.

Jamrock was the name of that party and even though it happened a week after one of the most publicised parties to have happened on KNUST campus (Hysteria), it was, in true TeamLogoz fashion, another rousing success. By this time the boys had become unstoppable and they were bent on having the best party in their last semester in school.

When the second edition of UABA was being planned, it was expected to be one of the biggest parties for Repu Hall Week 2015. How big it would be was not even close to what happened on the night of the party. The crowd that could not get into UABA 2 was so big that it spun off another party outside the venue. As the organisers once mentions, the challenges of the earlier parties Team Logos held were always about competition but the challenge of UABA 2 was its own success.

A year has gone by and the boys are out of school but have left such a lasting impression that there are still a few people holding on to the Logoz legacy and if there was ever a representation of that legacy, it was obviously the Unprecedented All Black Affair.

So on Repu Saturday, the boys come back home to give to the people of KNUST and Repu Goers, another taste of the phenomenon. It promises to be true to all the great things that have made past editions great and still avoid a situation where success will be the challenge.