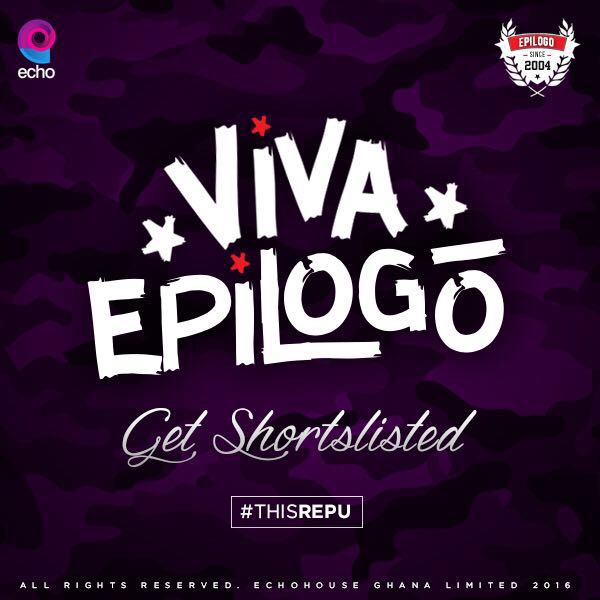 It has always been the epilogue to the story that is Life in KNUST. It’s that simple. The acclaimed Repu Hall Week Thursday event has gone through a long journey to what it is today, and that’s the story we are going to share with you!

In the second semester of the 2003/2004 Academic year, a few guys in Gaza (Ghana Hostels Ltd – KNUST) decided to hold an event that would commemorate the impending end to their years in the school. There was music, beer kegs and a few friends and course mates in Gaza having fun. It coincidentally happened around the Repu Hall Week and there wasn’t much to say about that very first Epilogo beyond it being a success for the guys and everyone who was around.

In 2005, another group of guys in Gaza decided to bring it back. This time it was purposely planned to coincide with Repu and it happened on the Repu Hall Week Friday and a lot of the people who were in Kumasi for the Hall Week showed up to Epilogo. It was at this time that the people began to realise there was something there.

The class of 2006 figured that, if this was as great as people said it was, then they might be willing to pay for it. So that year, the event was moved from Gaza for the very first time to Treasureland Hotel and there was a gate fee. Not known to be an outside-campus event, the turn out wasn’t like the years before but it was still a good party.

There is very little said about the Epilogo of 2007 except it was the one after which the event went on a three year hiatus.

After three consecutive years of without Epilogo, Meister (of Meister Music) decided it was time to bring the event back. However, it wasn’t brought back to it’s original home. The 2011 edition which was dubbed Epilogo Royale was held at The Drive at the Golden Tulip Hotel – Kumasi.

Another year went by after that without Epilogo. It is believed to be the time when all those who were concerned about the brand decided to find out a way to trump the slow run and Make Epilogo Great Again.

So in 2013, Echohouse Ghana got it’s teams on KNUST campus and other campuses to come together to plan the revival of one of Repu Hall Week’s cherished traditions. It could not be held in Gaza, but it was going to be held in a place that wasn’t going to veer off the course that the very first Gaza event had taken. Georgia Hostel was selected to be the new home of Epilogo. One important modification or let’s say addition that was made to the idea was to make it an all shorts affair. Hence the name ‘Epilogo: Shorts Affair’ for the 2013 event.

That continued into 2014 after the 2013 event was hugely successful. In 2014 the ‘Shorts Affair’ theme got it’s official hashtag #GetShortslisted. That went on to become even bigger than the previous year. In 2015, the team decided to tap back into the Spanish origins of the name by christening that year’s event ‘Epilogo: Carnivale’ still using #GetShortslisted as the official hashtag. It was the biggest Epilogo ever…well until now!

That’s what it is going by this year. After successfully saving and making Epilogo the iconic event it was meant to be and the somewhat-official Repu Hall Week Thursday event, the team behind Epilogo believes that it is here to stay…forever! In an interview with Echohouse COO, Bright Ayaaba; he mentioned that people have suggested that Echohouse registers the Epilogo name and the event, to which his response has always been; Epilogo shouldn’t belong to one person or entity. It started as a thing for friends and he intends to preserve that sanctity. As long as someone else is dedicated to providing happiness under the Epilogo name, Echohouse is willing to work with them to make it happen.

Viva Epilogo will take place in Georgia Hall on March 24th from 9pm. The promise is that it will be the biggest and most exciting epilogue to the fantastic 4 year run of the final year students in KNUST and an all round bad ass party for every one else.