Kuulpeeps – Ghana Campus News and Lifestyle Site by Students
Home CAMPUS EXTRA RepuHW16 Amid In-fighting and Politicking in the hall; Will #RepuHW16 Live Up To...
Facebook
Twitter
WhatsApp 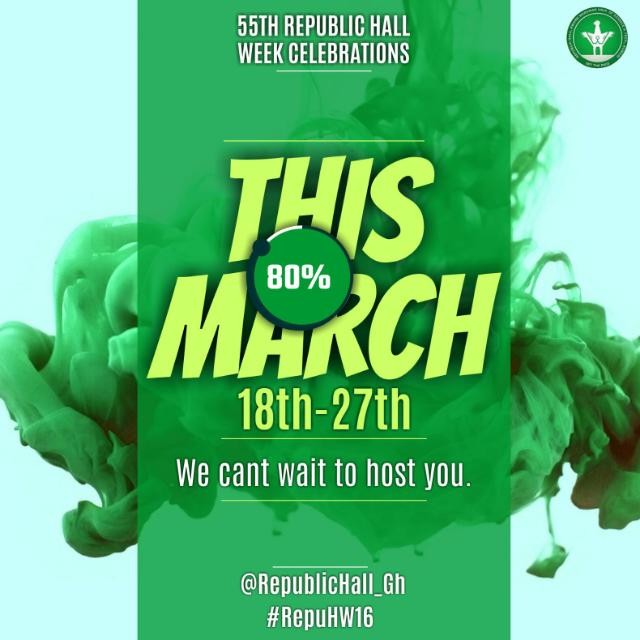 The much anticipated hall week on the campus of the Kwame Nkrumah University of Science and Technology, Republic Hall Week, has been scheduled to start on the 18th to 27th March.

Republic hall week is the only hall week in a university in Ghana where people come in from all walks of life just to have the experience and exposure it offers.

Naturally, event organizers of various hall weeks in KNUST and other universities in Ghana write proposals to seek sponsorship for their programs but it is the reverse in the case of Republic hall week. Sponsors rather lobby with organizers to get a space to sponsor the week celebration.

Moreover, businesses also lobby for sheds in order to get space to exhibit their goods to the world as the Republic hall week is known to bring people from far and near on one campus. This has over the years fetched money for the hall.

However, this year, due to litigation issues that characterized the entertainment Chairmanship position, Republic Hall week will happen but without an entertainment chairman to spearhead the activities.

Some students who spoke to kuulpeeps.com  were of the view that the euphoria that surrounds Republic Hall Week has died down because although some students were selected to form an entertainment committe, the President of the hall seem to be running a one-man – show.

Kuulpeeps  source in the adhoc  entertainment committee formed mentioned that although they have been charged with the duty of making this year’s REPU a mega one, they seem to be handicapped as the President of the hall has usurped that powers vested in them.

Republic Hall week has over the years been the talk of town and much is always been expected of organizers to roll out engaging programs. There has always been an improvement upon what happened every year so same can be said about this year’s program.

With the current state of the Republic Hall JCR, are students and individuals coming to this program from far and near have value for their money? Time they say will tell!!!