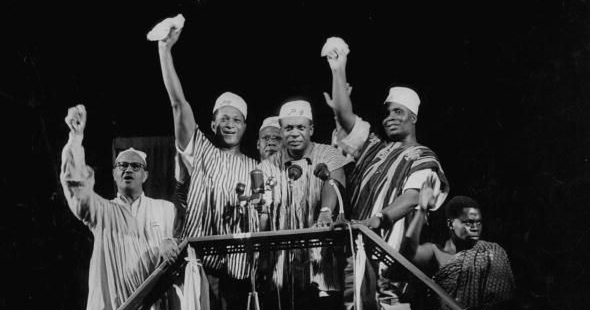 In the 50s, a nation gaining independence from it’s colonial master was no small feat. It took a lot of effort, sacrifice and sheer audacity, usually over a long span of time. Here are 5 events that capture those qualities over the 10-year period leading up to 6th March, 1957.

United Gold Coast Convention (UGCC) is one of many new political parties striding for independence. None of the parties are formed inside the colony. Kwame Nkrumah is party secretary for UGCC. On 10 December 1947, Kwame Nkrumah returned to the (British colony) accepting Danquah’s invitation to become the UGCC General Secretary. Big Six member Ebenezer Ako-Adjei recommended inviting Nkrumah, whom he had met at Lincoln University. Nkrumah was offered a salary of £250, and Paa Grant paid the boat fare from Liverpool to Ghana Danquah and Nkrumah subsequently disagreed over the direction of the independence movement and parted ways after two years. Nkrumah went on to form the Convention People’s Party and eventually became the first president of independent Ghana. The UGCC disbanded after performing poorly in the 1951 elections.

Riots breaks out in Accra when Police fires at an anti-colonial demonstration. 29 are killed and hundreds are wounded. The Accra Riots started on 28 February 1948 in Accra (capital of present-day Ghana, which at the time was the British colony of the Gold Coast), after a protest march by unarmed ex-servicemen was broken up by police, leaving several leaders of the group dead. Among those killed was Sergeant Adjetey.who has since been memorialized in Accra. In January 1948, the Ga chief Nii Kwabena Bonne II had organized a boycott of all European imports in response to their inflated prices and the 28 February incident is considered “the straw that broke the camel’s back”, marking the beginning of the process of independence for the Gold Coast as Ghana – the first African colony to achieve this

Dissatisfied with the efforts of UGCC, Kwame Nkrumah leaves and founds the Convention People’s Party (CPP). CCP quickly becomes the major player on the nationalist political scene. They went on to win the first national elections

Nkrumah becomes the first African prime minister and government leader, but still shares the power with the British governor Sir Charles Arden-Clarke. Nkrumah is re-elected in for the post in 1954 and 1956

British Togoland was a territory in West Africa, under the administration of the United Kingdom. Initially it was a League of Nations Class B mandate. Subsequently, it was a United Nations Trust Territory. It was effectively formed in 1916 by the splitting of Togoland into two territories, French Togoland and British Togoland, during the First World War. In 1922, British Togoland was formally placed under British rule while French Togoland, now Togo, was placed under French rule.During the decolonization of Africa, a plebiscite was organised in British Togoland in May 1956 to decide the future of the territory. A majority of voters taking part voted to merge the territory with the neighbouring Gold Coast, a British Crown colony