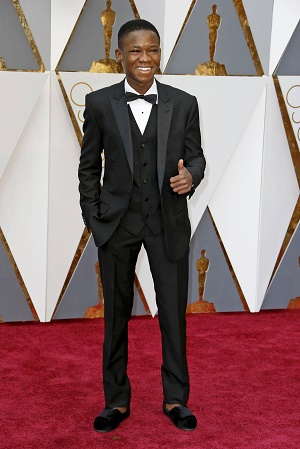 Yesterday, many were wondering why Ghanaian actor and Beasts of No Nations star Abraham Attah arrived at the 88th annual Academy Awards in Los Angeles dressed in a black tuxedo and velvet TOMS. Kuulpeeps have uncovered the real reason why Abraham Attah chose to wear TOMS to the Academy Awards.

In a tweet by TOMS, they have said that with the help of Abraham Atta, they are giving ten thousand pairs of TOMS to kids in need of shoes in Ghana.

It does not come as a surprise since for every pair of TOMS sold, it donates a pair of shoes to kids in need. It is not the first time Abraham Atta is wearing  TOMS,  at the Independent Spirit Awards where he won Best Actor in Lead Role for the movie, Beasts of No Nations, he was spotted wearing the lace-up TOMS.

With the help of @AttahNii, we’re giving 10k pairs of shoes to kids in need in his home country of Ghana. #Oscars pic.twitter.com/HJWTdG8xru

Telecommunication giants, AT&T also tweeted about the shoe; saying it was on point.