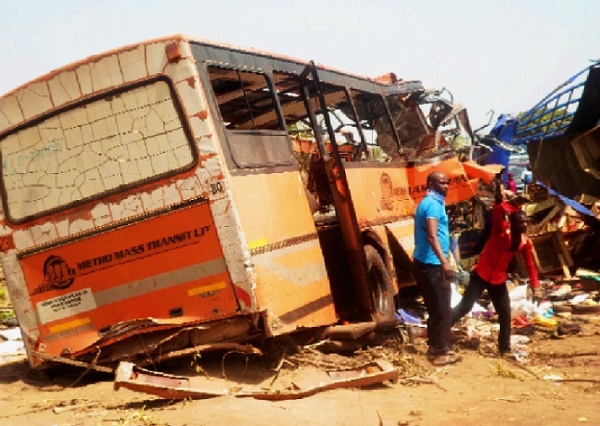 Survivors of the Kintampo carnage have given accounts of why and how the accident occurred. Kuulpeeps gathered two reasons for the occurrence while there is one account of how it happened.

On how it happened, accounts by almost all the survivors seem to be the same. The bus driver stopped along the way to address a fault on the bus, he, however, could not repair the bus well enough but continued the journey.

The bus was running at a top speed when the driver hit three cows and  lost control of the steering wheel. Consequently, he rammed into a truck carrying tomatoes.

This account has been corroborated by almost all the survivors.

A survivor, known as Charles, has given his own account as to why the incident occurred. According to him, certain persons were carrying body parts of dead relatives on the bus but failed to perform the necessary rituals. The body parts were meant to be buried in their hometowns.

In some Ghanaian traditions, relatives are allowed to bury only parts of their dead in their hometown if arrangements can not be made to bring them to their hometown. Charles claims he was carrying body parts himself but he told the driver, who did the required rituals to make it safe for travel. The others, however, did not tell the driver, neither did they perform the required rituals.

Charles believe this is the reason why over 64 people perished in the accident.

The Metro Mass Transport Union has launched investigations into the cause of the accident. President Mahama has also pledged GHS 100,000 for the upkeep of the survivors. Kuulpeeps shall be you updated.