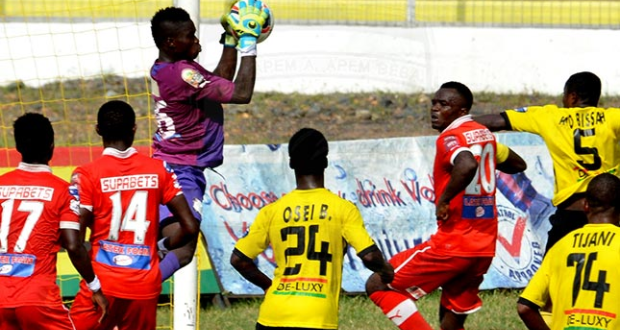 Despite a letter seeking to place injunction on the Ghana Premier league, matches came on at the various league centers as expected.

Match day one was full of mixed happenings. A blend of ecstacy, shock and suprises.

The league which started on February 20th in Sogakope saw the lads of West African football Academy take on the Porcupine warriors, the fabulous Kumasi Asante Kotoko. Regardless of Kotoko’s form in the pre-season, the Sogakope based team silenced them by two goals to nothing. Goals from Charles Osei and Samuel Tetteh was enough to silence the Fabulous boys.

The center of attraction on February 21 was the Accra sports stadium. It was a sight to behold. An average crowd present and the display of talent on the field was enough to send the message across that the Ghana Premier league had began. The team that suffered through pre-season, Accra Hearts of Oak pipped a revived New Edubiase with a goal from Samuel Tetteh.

In Brong Ahafo, it was a regional affair when embattled new entrant, Techiman City took on regional rivals, Berekum Chelsea in their debute match in the Ghana league. A goal from Issaka Ibrahim gave the new babies the maximum points they needed.

Goals from Fuseini Nuhu, Alhassan Nuhu and Bernard Ofori were enough in a three-goal thriller that saw Ashantigold defend her tittle by beating Tarkwa-based Medeama by two goals to one.

Inter Allies started the season on a high note when they beat Aduana stars at home by two goals to nothing with goals from Ropapa Mensah and Isaac Twum.

It was however a battle of debutants when Cape Coast-based Abusua dwarfs started their league on a very low note losing by a slim margin to Dreams FC. A goal from Johnson Owusu gave the visitors the needed three points to register their presence in the league.

Their trip to Saudi Arabia seemed to have paid off as Wa All Stars walked over Sekondi-based Hasaacas who have for sometime struggled with player agitation over unpaid salaries. Two goals from Maxwell Baako and a goal from Richard Arthur set the tone for the Upper West based club in this year’s league.

Dansoman-based Liberty Professionals started with a lose at Bechem to Bechem United. Goals from Francis Afriyie and Yaw Andoh were enough for the Bechem team to keep their unbeaten run in their last ten matches.

In all, home teams did a better job by picking 21 points whereas just an away team (Dreams FC) was able to pick three maximum points. Bernard Ofori and Johnson Owusu were the only away players who registered their names on the score sheet.