Kuulpeeps – Ghana Campus News and Lifestyle Site by Students
Home POP CULTURE Life In Case You Missed Out, This Is Nana Aba’s Question Which Got...
Facebook
Twitter
WhatsApp 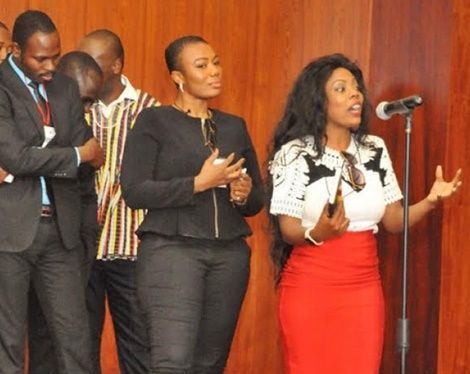 Nana Aba Anamoah was present at the President’s press conference yesterday at the Flagstaff House. Her question has been trending on social media since yesterday; with some against it whiles others think it was a right question to ask. This is the question and how President Mahama answered it.

Question: What keeps you awake at night?

President’s answer:  I hardly sleep…God bless me with sleep. I’m a good sleeper…If anything keeps me awake, it is just how to make this country a better place.

Clearly, Nana Aba was more concerned with the President’s state of mind. These people, however, argued that her question was unnecessary.

Infact Nana Aba needs to be lashed for asking that question
Did she think it was an interview about the Prez private life
We talking issues!

How is asking the Prez what keeps him awake at night a loose question?

There were also people who thought her question was a good one.

To say #NanaAba question was unintelligent simply elucidate your level of mediocrity. To hv a sleepless @JDMahama speaks volumes. @benkoku

Nana Aba's question is to be well-understood by intellectuals only. Sorry for those who hav a challenge in spotting it's relevance #CitiCBS

Amidst the right or wrong sides, someone gave a sexual connotation to the question.

Well, let us know if you think it was a right question to ask at a press conference.

What Mahama Said About Dumsor, Guantanamo Detainees And DKM Microfinance