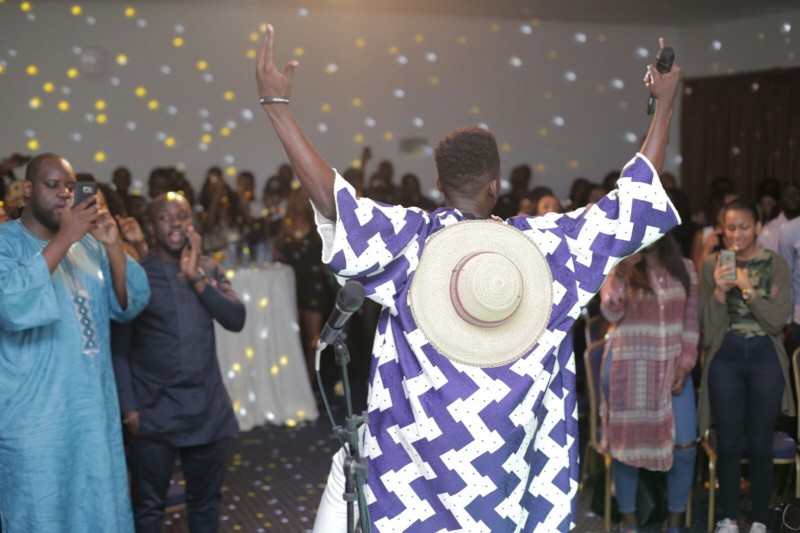 Nothing screams intimate than a close gathering, nice drinks and soothing music all in the bid to celebrate music and creativity in its purest form. Mr. Eazi as a Christmas package treated 69 of his most loyal fans to a night of live music, good drinks and first-time performances with support from Okuntakinte, Eugy, Pappy Kojo and Deborah Vanessa as the MC for the night.

Fiesta Royale played host and the night that had Mr. Eazi, the headline artiste take fans through music and the meaning to each lyrics, it was a fun sight to behold as the audience couldn’t hold their excitement from cheers to the trending #69WithMrEazi across social media platforms.

From ‘Skintight’ to ‘Bankulize’ he had his crowd glued as they jammed to the rhythms from the Musical Lunatics, the show added a brilliant twist to the Christmas festivities that have either been parties or concerts. The live intimate session provided Mr. Eazi not only an avenue to show off his skin and artistic prowess but also for fans to interact while jamming to the brilliance of contemporary Ghanaian music and art in general.

As Okuntakinte wowed the audience with his ‘Melanin Girls’ and ‘Summer of X’, Eugy performed his single with Mr. Eazi, ‘Body’ and Pappy Kojo, more than his music. He offered the ladies an eye candy while the guys jammed to ‘Bankulize’ among other tunes in his catalogue.

All in all, it was a great night as till the early hours of this morning it was still trending in both Ghana and Nigeria as the crowd was a cross-section from both countries who got the chance to reserve seats on www.MrEazi.com. If last night has anything to talk of, it will be the fact that Ghana has a place for good, timeless and brilliant music potent enough to get people to pay attention.

With Meister Music’s crest crafted into the DNA of the production and the artistes that made the night a success, they promise to have more intimate sessions like the #69WithMrEazi in the coming year. Congrats bra, you did great!!!!